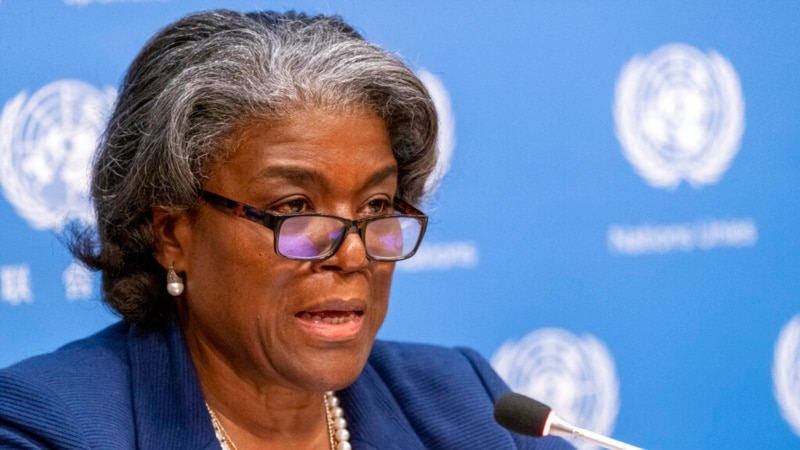 A senior U.S. official said Tuesday that Iran cannot be allowed to “slow-walk” nuclear diplomacy at talks in Vienna to revive the 2015 deal to prevent Iran from obtaining a nuclear bomb.

“And we’re convinced that if Iran approaches talks in Vienna with urgency and good faith, we can quickly reach and implement an understanding on mutual return. We cannot, however, allow Iran to accelerate its nuclear program and slow-walk its nuclear diplomacy,” U.S. Ambassador Linda Thomas-Greenfield told the U.N. Security Council. “I am sorry to report that is exactly what appears to be happening at JCPOA talks in Vienna.”

She reiterated that the Biden administration is “fully prepared” to lift sanctions inconsistent with its commitments under the deal, known formally as the Joint Comprehensive Plan of Action. That would allow Iran to receive the economic benefits of the deal.

Thomas-Greenfield said Iran marked the latest round of talks that began on November 29 with new nuclear provocations and “vague, unrealistic, maximalist and unconstructive positions” on both nuclear and sanctions issues.

The United States is participating indirectly in the talks because it withdrew from the deal under the Trump administration in 2018. But in New York, both U.S. and Iranian ambassadors were seated around the same Security Council table.

“Let me be clear: Iran’s actions will not provide Iran with any leverage in negotiations and only intensify our concerns with Iran’s activities,” she said.

“The fact is that we have been completely deprived of our rights and benefits under the JCPOA for almost four years,” Ambassador Majid Takht Ravanchi told the council.

He said the Iranian people are feeling the impact of the sanctions.

“As the results of such gross violations of international law, the scope and extent of the damage to the Iranian people and economy is severe,” he said.

He said Iran must be assured that all sanctions will be lifted and that the U.S. will not withdraw from the deal again.

“Our team in the Vienna talks is serious and well prepared to engage meaningfully and constructively with the other sides, and hopes to see the same approach from them,” Ravanchi told reporters after the meeting.

The Security Council meets twice each year to review implementation of the nuclear deal, which it endorsed in a council resolution. The JCPOA provided Iran with sanctions relief in exchange for limits on its nuclear program. Tehran denies seeking nuclear weapons.

In addition to Iran, the remaining parties to the deal are Britain, China, France and Russia, plus Germany.

“We are at a crossroads: If Iran engages seriously in the diplomatic process, a good deal for Iran and for all of us can be reached rapidly,” said German Ambassador Antje Leendertse. “If Iran does not engage constructively, crisis will be inevitable and will be costly for us all.”

The E3, as Britain, France and Germany are known, have been clear they do not want the deal to collapse, but they have warned in recent days that the window of opportunity is closing.

“We are nearing the point where Iran’s escalation of its nuclear program will have completely hollowed out the JCPOA,” France’s U.N. envoy Nicolas de Riviere said ahead of the meeting, reading a statement on behalf of the three nations.

One year after the U.S. withdrawal, Iran began advancing its nuclear program, enriching uranium beyond the thresholds allowed in the agreement, among other steps. It has also prevented inspectors from the International Atomic Energy Agency from accessing its nuclear facilities, raising concerns about what is going on behind closed doors.

Even Russia and China, which are sympathetic to Iran, have made clear they want to see Tehran’s return to full compliance, as well as the U.S. return.

“The deal is the biggest confidence-building measure both in the region and globally,” said Russian deputy U.N. ambassador, Dmitry Polyanskiy. “Without it, there can be no confidence. Those who believe there can be a “world without JCPOA” must recognize that this would be another world, far less predictable and more dangerous.”

U.N. Secretary-General Antonio Guterres called on Washington to lift or waive its JCPOA-related sanctions. Those sanctions were reimposed by the Trump administration after it left the deal.

NYC cop wounded by bullet to be released from hospital