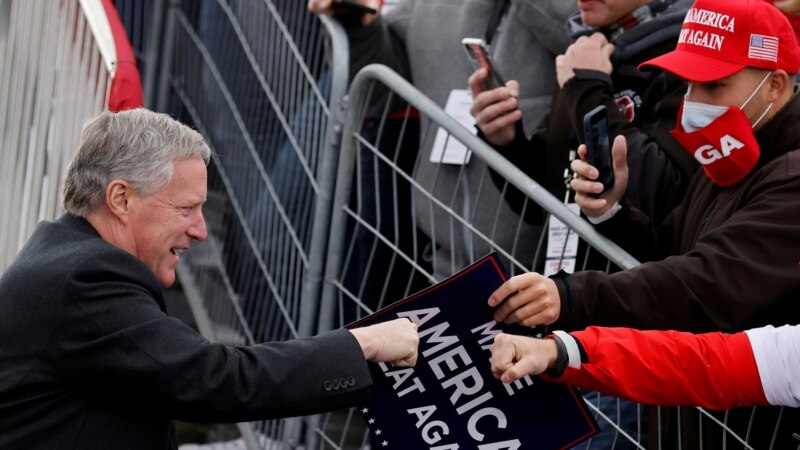 The U.S. House of Representatives is set to vote Tuesday on whether to refer contempt of Congress charges against Mark Meadows, former President Donald Trump’s White House chief of staff, to the Justice Department for possible prosecution after Meadows refused to testify about his role in trying to overturn Trump’s 2020 presidential election loss.

A congressional committee investigating the January 6 riot at the U.S. Capitol, when hundreds of Trump supporters stormed the building in a futile attempt to keep lawmakers from certifying that Democrat Joe Biden had defeated Trump, voted unanimously Monday to recommend that Meadows face criminal charges.

Meadows said in an interview on the Fox News cable network late Monday the committee’s decision was “disappointing, but not surprising.”

“This is about Donald Trump and about actually going after him once again,” Meadows said.

Ahead of the committee vote, Republican Congresswoman Liz Cheney detailed text messages sent to Meadows as the riot unfolded, with prominent conservative media figures and one of Trump’s sons urging Meadows to encourage Trump to do more to halt the actions of his supporters.

At a rally earlier that day, Trump had urged his supporters to “fight like hell” to keep him in office for a second four-year term. More than 600 rioters, some of whom smashed windows, ransacked congressional offices and attacked police, have been charged with criminal offenses.

On air, three Fox News hosts, all ardent Trump supporters, downplayed the violence, suggesting that anti-Trump infiltrators had fomented the violence, or saying that most of the people who entered the Capitol were peaceful.

But one of the hosts, Laura Ingraham, had earlier texted Meadows, “Mark, the president needs to tell people in the Capitol to go home. This is hurting all of us. He is destroying his legacy.”

Cheney said the messages show Trump’s “supreme dereliction” and raised questions about whether through his inaction he sought to interrupt the congressional task of certifying the presidential election result showing that he lost.

“These texts leave no doubt,” Cheney said. “The White House knew exactly what was happening at the Capitol.”

Late in the afternoon, hours after the violence erupted at the Capitol, President Trump urged his supporters to “go home now,” while continuing to claim falsely that his re-election was stolen from him.

In a later tweet that day, Trump appeared to justify the mob’s actions.

“These are the things and events that happen when a sacred landslide election victory is so unceremoniously & viciously stripped away from great patriots who have been badly & unfairly treated for so long,” he wrote. “Go home with love & in peace. Remember this day forever!”

Congressman Bennie Thompson of Mississippi, chairman of the January 6 investigating panel, said, “Whatever legacy [Meadows] thought he left in the House, this is his legacy now.” Meadows is a former Republican representative from North Carolina.

Meadows initially agreed to testify about his role before January 6 in trying to help Trump claim a second four-year term in the White House and his actions that day. But last week, Meadows changed his mind about testifying, citing Trump’s assertion of executive privilege to keep documents secret.

The House committee has already held another former Trump aide, Steve Bannon, in contempt of Congress for his refusal to comply with a subpoena to testify. Bannon was later indicted and, if convicted, could face up to a year in prison.

The investigative panel late Sunday issued a 51-page report that showed Meadows was deeply involved in trying to keep Trump in office even though the former president had lost five dozen court challenges in various states contesting his election loss and numerous vote recounts in individual political battleground states all upheld Biden’s victories.

State election officials often said there was no appreciable voter fraud, as Trump has alleged to this day, that would have changed the outcome in his favor.

If Meadows had appeared for a deposition, the committee said it would have questioned him about numerous documents he provided.

On Monday, Meadows said through his attorney that the committee’s referral was unwise, unfair and contrary to law, according to The Associated Press.

In a November 7, 2020 email, the committee said that just days after Trump lost the election, Meadows discussed an effort to have state legislators in states Trump lost appoint electors supporting Trump rather than the pro-Biden electors a majority of voters had chosen.

In text messages with an unidentified senator, Meadows discussed Trump’s erroneous view that then-Vice President Mike Pence had the power to overturn the Electoral College vote count as lawmakers officially certified the state-by-state tally on January 6. Pence drew Trump’s ire as he refused to upend the Electoral College vote, which Biden won by a 306-232 margin, the same count Trump won by in 2016.

A day before the riot occurred, Meadows said National Guard troops would be at the Capitol to “protect pro-Trump people.” Other emails touched on the rioting at the Capitol as it unfolded, with pro-Trump supporters shutting down the Electoral College vote count for hours before Biden was finally declared the winner in the early hours of January 7.

The committee also said it wanted to ask Meadows about claims he made in his new book, “The Chief’s Chief,” about his time in the White House with Trump.

In turn, Meadows has sued the committee, asking a court to invalidate two subpoenas that he says are “overly broad and unduly burdensome.”

The panel has interviewed nearly 300 witnesses and lawmakers linked in some way to the rioting or contesting of the election results. The committee says it is planning a series of hearings early next year to make public many of its findings.

Some information in this report came from The Associated Press and Reuters.