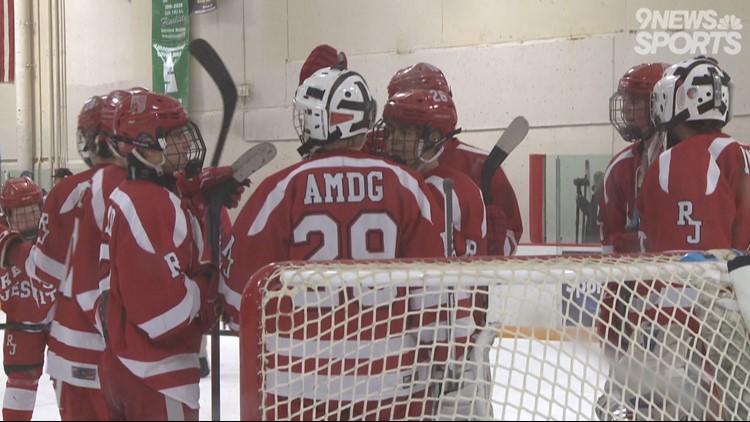 The No. 1-ranked Raiders exploded in the third period to defeat the Eagles 6-1 on Monday.

LITTLETON, Colo. — As far as Monday matinee games go, the Regis Jesuit vs. Dakota Ridge hockey matchup was about as good as anybody could ask for.

Both the Raiders and Eagles went into Monday afternoon’s game at Edge Ice Arena with undefeated records. It was Regis Jesuit, however, which left with its still intact following a 6-1 victory.

A strong third period lifted the Raiders, who are ranked No. 1 in Class 5A, to victory.

Regis Jesuit had five different players score in the six-goal frenzy, Carter Schick the only Raider to find the back of the net twice. Sean Holloway, Andrew Gleason, Jacob Zinno and Cameron Balatbat each scored one goal

Four goals were recorded in the third period alone to blow the game open. Dakota Ridge’s lone goal was scored by Madden Sundquist in the final minute of the second period, a strike the Raiders responded to just seconds later via Gleason’s goal.

“We were happy to get that one back, and I think it game us some good momentum going into the third (period),” Schick said. “We rolled off that and were able to execute.”

Regis Jesuit improves to 5-0 on the season with the victory and will next play Heritage (0-1-1) on Friday before traveling to No. 3 Monarch (4-0) on Saturday.

Dakota Ridge falls to 2-1 after suffering its first loss. The Eagles will look to bounce back Friday night when they host No. 8 Cherry Creek (2-2).

>>Watch the extended video above and see the highlights on the 9NEWS Prep Rally this weekend!

> Top stories are curated daily just for you! Sign up for the 9NEWSLETTER to get can’t-miss stories, Next and Denver Broncos content, weather and more delivered right to your inbox.

For both Apple TV and Fire TV, search for KUSA “9news” to find the free app to add it to your account. Another option for Fire TV is to have the app delivered directly to your Fire TV through Amazon.