One year ago, nurse Sandra Lindsay sat down in a slate blue chair at Long Island Jewish Medical Center in New York, rolled up her white sleeve and made history.

Lindsay arrived at work that Monday knowing she would be among the first people in her hospital – and the United States – to get vaccinated against the deadly coronavirus. But she had no idea she would be the first, outside of clinical trials.

Since then, she has appeared on national television to advocate for vaccination, been celebrated in a ticker-tape parade for health care workers, and was recognized for her courage by President Joe Biden during a ceremony at the White House. The scrubs she wore were donated to the National Museum of American History as part of the collection that will record this chapter of life in the U.S. “I can’t even wrap my head around that,” Lindsay told the PBS NewsHour. 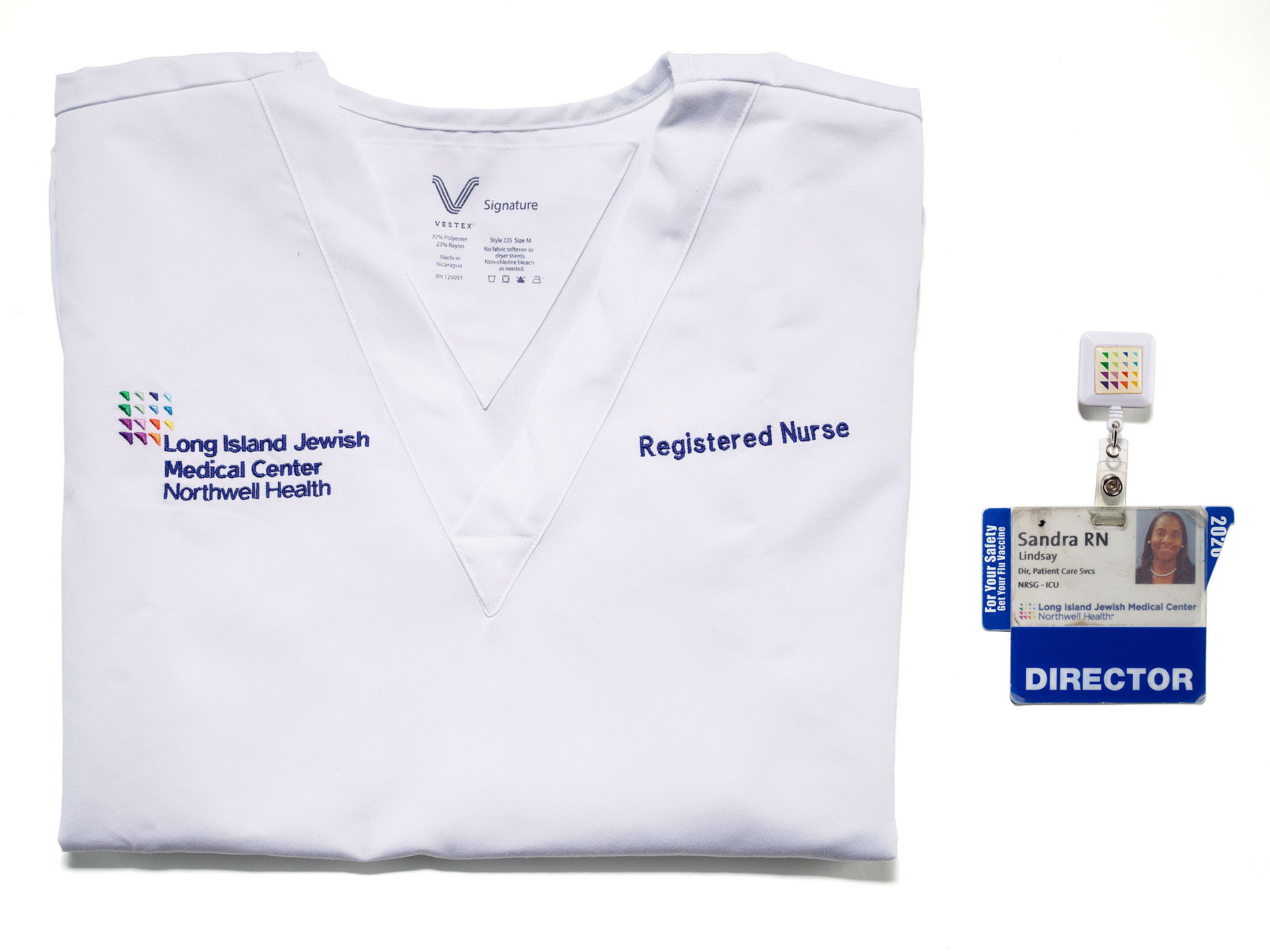 Scrubs and an ID card belonging to Sandra Lindsay, an ICU nurse at Long Island Jewish Medical Center in New York. These were among the items donated to the Smithsonian’s National Museum of American History to mark the milestone of Lindsay being the first person in the U.S. to receive the COVID vaccine, outside clinical trials. Photo by Jaclyn Nash, courtesy of the National Museum of American History

Throughout the pandemic, Lindsay has worked alongside her staff of nurses she directs to save patients from this terrifying disease. A longtime advocate of the power of vaccines, she said she monitored the news, read research studies about efforts to slow the spread of the virus and prayed in the months before she got her shot. She knew that the world – and especially her patients and staff – could not rely on social distancing, hand hygiene and face masks alone to stay safe.

Once she received her first vaccine dose, she encouraged fellow nurses and people in her life to get vaccinated. Lindsay said she felt hope, relief and a belief that the pandemic’s spread would slow as more people got theirs.

Looking at the hospital where she has worked for years, as well as how life has changed since multiple COVID-19 vaccines became available, “it’s a stark contrast to where we were a year ago,” Lindsay said. Far fewer people are showing up at her hospital because they are sick with the coronavirus, she added. 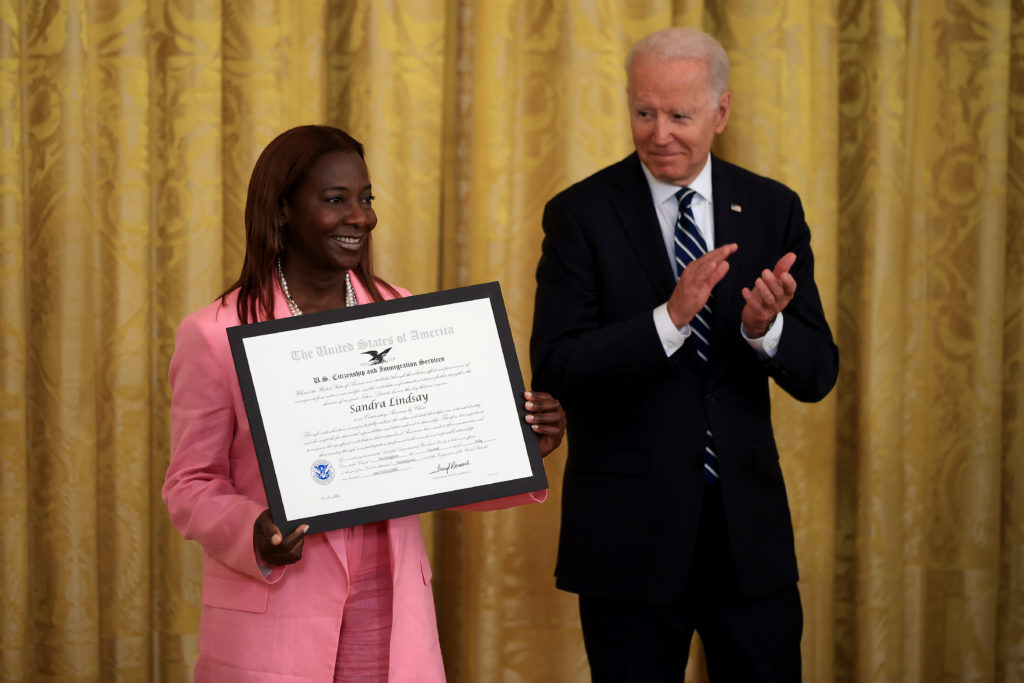 Jamaican immigrant Sandra Lindsay is presented with the U.S. Citizenship and Immigration Services’ Outstanding Citizen By Choice award by President Joe Biden during a July 2, 2021, naturalization ceremony at the White House. Photo by Chip Somodevilla/Getty Images

On how the year has gone since she got vaccinated

Lindsay knows there’s more work to do. About three-quarters of the U.S. population age 5 or older have gotten at least one vaccine dose, according to CDC data. But the coronavirus has mutated into a succession of variants that have become more transmissible over time. Unvaccinated people still make up the overwhelming majority of people hospitalized for the virus, experts say. But fully vaccinated people, particularly those with compromised immune systems, have been needed to seek medical care and treatment, in part because unvaccinated people give the virus more opportunities to mutate into something even more dangerous.

“I was hoping for a faster sprint to cross the finish line, and you know, we haven’t seen that,” Lindsay said.

The delta variant has been the main driver of new infections, hospitalizations and deaths for months, largely among people who had no vaccine protection. On Nov. 26, the World Health Organization alerted the globe to omicron, a new variant of concern. This variant has been detected in dozens of countries and several U.S. states, including her home state of New York, and likely has a far greater reach, given inadequate surveillance testing in the U.S. and elsewhere.

With the new surge and omicron also on the rise, Lindsay said she is “not panicking” but remains cautious. After working on the front lines of the nation’s COVID-19 response, Lindsay knows all too well what can happen when people let down their guard against the coronavirus.

After receiving three vaccine doses, including her booster, Lindsay said she is “following the science and waiting for the evidence. That means that if she enters a place where she doesn’t know everyone’s vaccination status, Lindsay said she wears a face mask, practices social distancing and washes her hands.

How she faced burnout, and found a way to cope

On top of the profound anxiety and sadness that came with treating patients for – and losing them to – a virus that always stayed a step ahead, Lindsay also was carrying grief and stress from family crises. Her mother’s sister died, and Lindsay could not console her mom in person. Her family welcomed her grandson, Avery, into the world, but his first months were fraught. Born premature on the eve of lockdown in March 2020, Avery spent nearly his first four-and-a-half months in a hospital’s neonatal intensive care unit. At times, he was unable to see anyone – even his parents – out of fear that his fragile body might be exposed to COVID-19. She worried, too, that she would get sick and not be able to care for either her patients or her family.

Facing all the complexities of life, she realized she was stressed when she was losing patience easily and unable to sleep or focus. Lindsay turned to meditation, and tried to keep hold of her optimism.

Nineteen months later, Lindsay said she is thrilled to be able to play with her grandson without wearing a mask, and she cannot wait until it is his turn to get vaccinated. 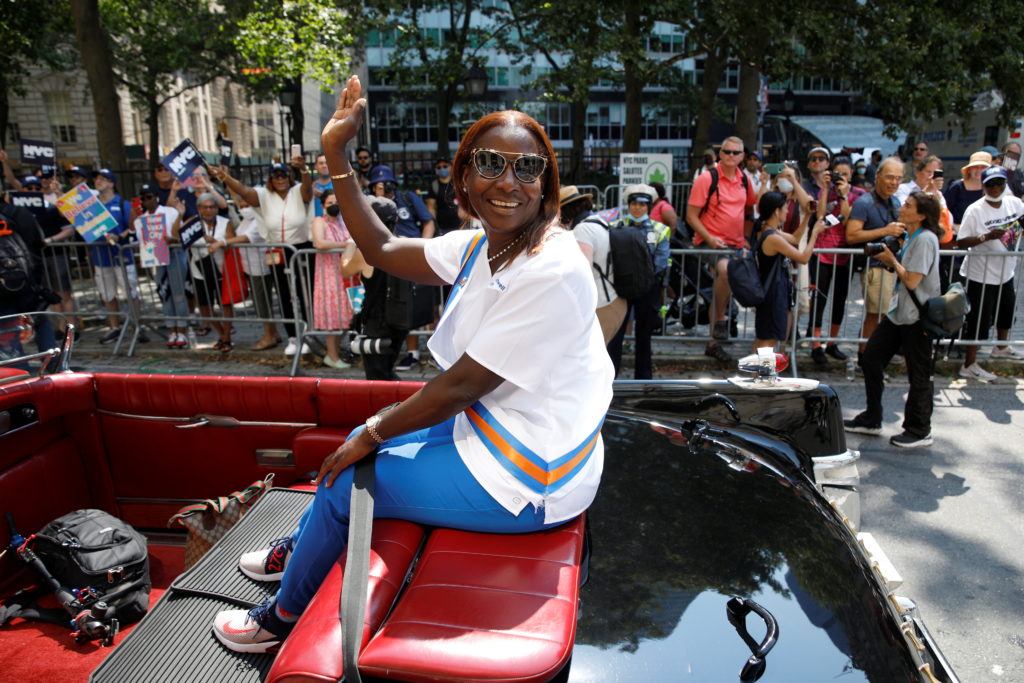 Health worker Sandra Lindsay waves as she takes part in the July 2 Hometown Heroes ticker tape parade, to honor essential workers for their work during the outbreak of COVID-19 in New York City. Photo by Brendan McDermid/Reuters

On where she sees things a year from now

Looking to the future, Lindsay still holds hope that things will improve. Originally from Jamaica, Lindsay said she wants to see more people vaccinated in the U.S. and around the world because “until we get that, we’ll continue to have variants.” Part of that effort must be grounded in health equity – narrowing disparities in access to the vaccine, hearing people’s concerns and answering their questions, Lindsay said.

She noted that she initially had questions about the vaccine, so she did her research, listened to experts, and found information on “reputable websites” before deciding to get her shot.

One year later, her message is that ”inaction is not an option.”

“We cannot continue to live like this,” she said.