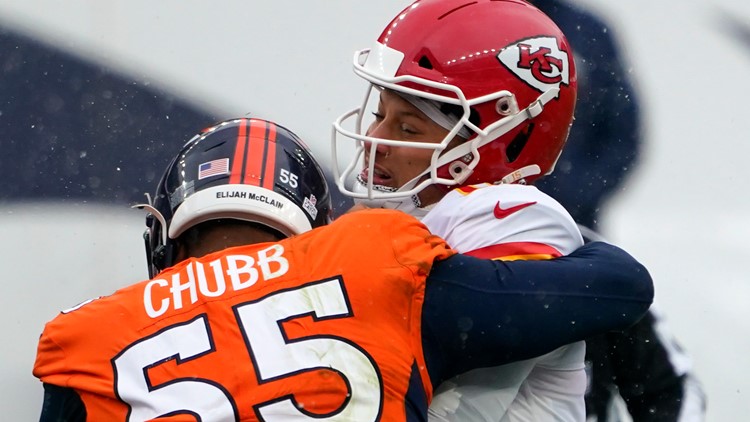 DENVER — In an NFL season featuring even greater parity than usual, the Broncos with their 5-5 record have played their way into prime time for a second time this season.

The Broncos’ game next Sunday against the rival Kansas City Chiefs, originally scheduled to kick off at 11 a.m., has been flexed to the 6:20 p.m. time slot for Sunday Night Football that is broadcast each week during the NFL season on 9NEWS.

Sunday Night Football initially was going to show San Francisco at Seattle but the Seahawks have fallen to 3-7 while the 49ers are 5-5.

After a slow start, the Chiefs have won four in a row and now lead the AFC West with a 7-4 record. Kansas City is on bye this week while the Broncos host the 6-4 Los Angeles Chargers this Sunday at Empower Field at Mile High. Better believe NBC sports executives will be pulling for the Broncos to beat the Chargers so it can be a first-place (Chiefs) vs. second-place (Broncos) next Sunday.

The Broncos have lost 11 in a row to the Chiefs, a skid dating back to their first meeting of 2015. And the Broncos were trailing, 24-17 late in that game before a 2-minute drive by Peyton Manning was capped by a game-tying touchdown pass to Emmanuel Sanders with 36 seconds left.

On the next play from scrimmage, Broncos inside linebacker Brandon Marshall popped the ball loose from ball carrier Jamaal Charles and cornerback Bradley Roby scooped it up and returned it for a touchdown with 27 seconds remaining to give the Broncos a 31-24 victory.

Denver went on to win Super Bowl 50 that year but the AFC West has been all Kansas City since then. The Chiefs’ streak began with a 29-13 win in Denver in the second meeting of the 2015 season, a game in which an injured Manning was benched after throwing four interceptions.

> Top stories curated daily just for you! Sign up for the 9NEWSLETTER to get can’t-miss stories, Next and Broncos content, weather and more delivered right to your inbox.

For both Apple TV and Fire TV, search for “9news” to find the free app to add to your account. Another option for Fire TV is to have the app delivered directly to your Fire TV through Amazon.