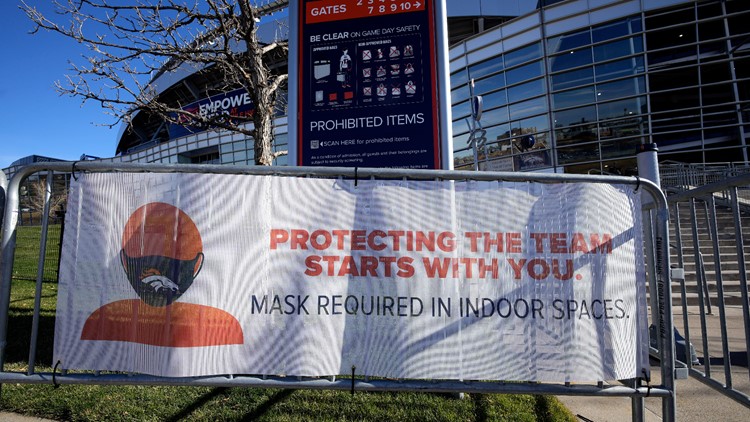 As games are being postponed in the NBA and NHL due to COVID-19 outbreaks, the NFL saw a record number of player positive tests Monday and into Tuesday.

NEW YORK — COVID-19 is spreading throughout the U.S.’ major sports leagues this week causing a flurry of postponements and an effort to encourage players to get their booster shots.

In the NFL, there’s been at least 62 positive COVID-19 tests since Monday. The 37 confirmed player positive tests on Monday was a daily record in the NFL. To put those numbers in perspective, from the first week of the NFL season (Sept. 5) through Nov. 27, there were 110 total player positive tests, according to ESPN.

It’s affecting some teams more than others, including the Cleveland Browns, who have had four key starters land on the COVID-19 list so far this week as they try to make a playoff push at the end of the season.

The Los Angeles Rams played on Monday Night Football in Arizona and found out before the game they would be without star cornerback Jalen Ramsey and starting tight end Tyler Higbee as the two were placed on the COVID-19 list. Higbee was activated on Tuesday, as the L.A. Times reported head coach Sean Mcvay said it was a false positive. However, on Tuesday, star Rams receiver Odell Beckham Jr. was added to the COVID-19 list along with five other Rams players.

SUBSCRIBE to the Locked On NFL podcast, your daily podcast covering all things NFL. Free and available on all platforms

In the NBA, we had the first game postponements of the year starting Tuesday as the Chicago Bulls-Detroit Pistons game will be canceled due to a COVID outbreak among Bulls players, as the team has 10 players currently in the league’s health and safety protocols. Chicago’s upcoming games on Thursday and Sunday have also been postponed.

The Brooklyn Nets will be without five players, including two starters, when they face the Toronto Raptors on Monday night because of the NBA’s COVID-19 health and safety protocols. The Los Angeles Lakers may also be dealing with COVID-19 issues as Talen Horton-Tucker tested positive for COVID-19 on Tuesday, causing the Lakers to cancel practice on Tuesday ahead of their flight to Dallas for Wednesday’s game against the Mavericks.

Players in the health and safety protocols must be sidelined at least 10 days or record two negative COVID-19 tests in a 24-hour period before they can resume basketball activities.

About 30 NBA games were moved around last season but all eventually got played.

SUBSCRIBE to the Locked On NBA podcast, your daily podcast covering all things NBA. Free and available on all platforms

The NHL postponed its lone game on Monday night between the Calgary Flames and Chicago Blackhawks due to an outbreak among Flames players. The NHL postponed the Flames’ next three games after six players and a staffer were placed in the protocol.

The Boston Bruins placed forwards Brad Marchand and Craig Smith in the NHL’s COVID-19 protocol on Tuesday ahead of their game in Las Vegas. The move for the Bruins comes three days after the Bruins played the Flames in Calgary.

Tuesday’s Carolina Hurricanes-Minnesota Wild game has also been postponed as six Hurricanes players have tested positive for COVID-19. As of now, the Hurricanes are scheduled to play Detroit on Thursday, but it’s likely that game is also postponed.

SUBSCRIBE to the Locked On NHL podcast, your daily podcast covering all things NHL. Free and available on all platforms

There’s been an increased effort over the past several weeks at least in the NBA for players to get COVID-19 booster shots.

Friday, Dec. 17 is being dubbed “Booster Day” for the NBA as COVID-19-related guidelines will update for staffers to be required to get their booster shots.

NBA data indicates over 60% of players have received their booster shots as of Tuesday.

The Associated Press contributed to this report